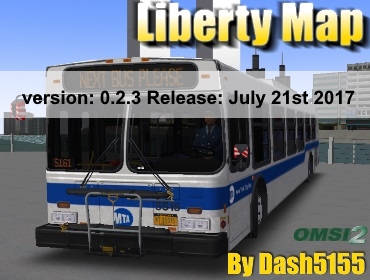 The Liberty Map for OMSI 2 takes the glory of being the first map to capture a network of NYC routes. The vast majority of 0.2.3 takes place in lower Manhattan (Mediaboro), Brooklyn (Brook), and Long Island City, Queens (Easton). To keep things compatible with OMSI, this map takes place in a fictitious setting, however, bus depot assignments and most streets in-game are actually based on real-life locations.

Donations are welcome as a way to say thanks!

If you are upgrading from an older version, you MUST REPLACE all the files that come with this version, including repaints, hof files, etc, else you will encounter glitches and incompatible hofs, which I will NOT be supporting

Vehicles needed for the non-reduced AI are (optional, as the map will still run without these):
NovaBus LFSA by MTA3306
NFI Xcelsior by MTA3306
MCI D4500CT by MTA3306
NovaBus/TMC RTS by MTA3306

If you cannot/do not wish to download the other buses, just enable the "reduced AI" setting in-game and your AI will simply be the Chicago Citybus instead

If there are any issues, comment below
Changes since 5/29/16 release:

Routes:
-new route M6 +Select Bus Service+
-a drivable version of the M8 crosstown
-a more realistic version of the B39, which terminates in the lower east side of Mediaboro instead of Navy Pier.
-a new route BM39 which operates the route of 0.2's B39

Misc:
- loads more scenery compared to 0.2
- rebuilt terminals, hubs, and loops.
- road markings for highways and bridges
- more parked cars in some residential neighborhoods
- fewer stops overall along routes in Brook (B62 went from having 39 total stops to 32, BM39 went from having 19 stops to 14).

And much much more!

The line numbers would end with...
28 for Mediaboro
72 for Brook
75 for Easton

Some points of the map namely, in Easton and Mediaboro, have uncontrolled traffic. Proceed with caution

Donations are welcome as a way to say thanks! Just follow this link to PayPal.

One thought on “Liberty Map (NYC Based)”